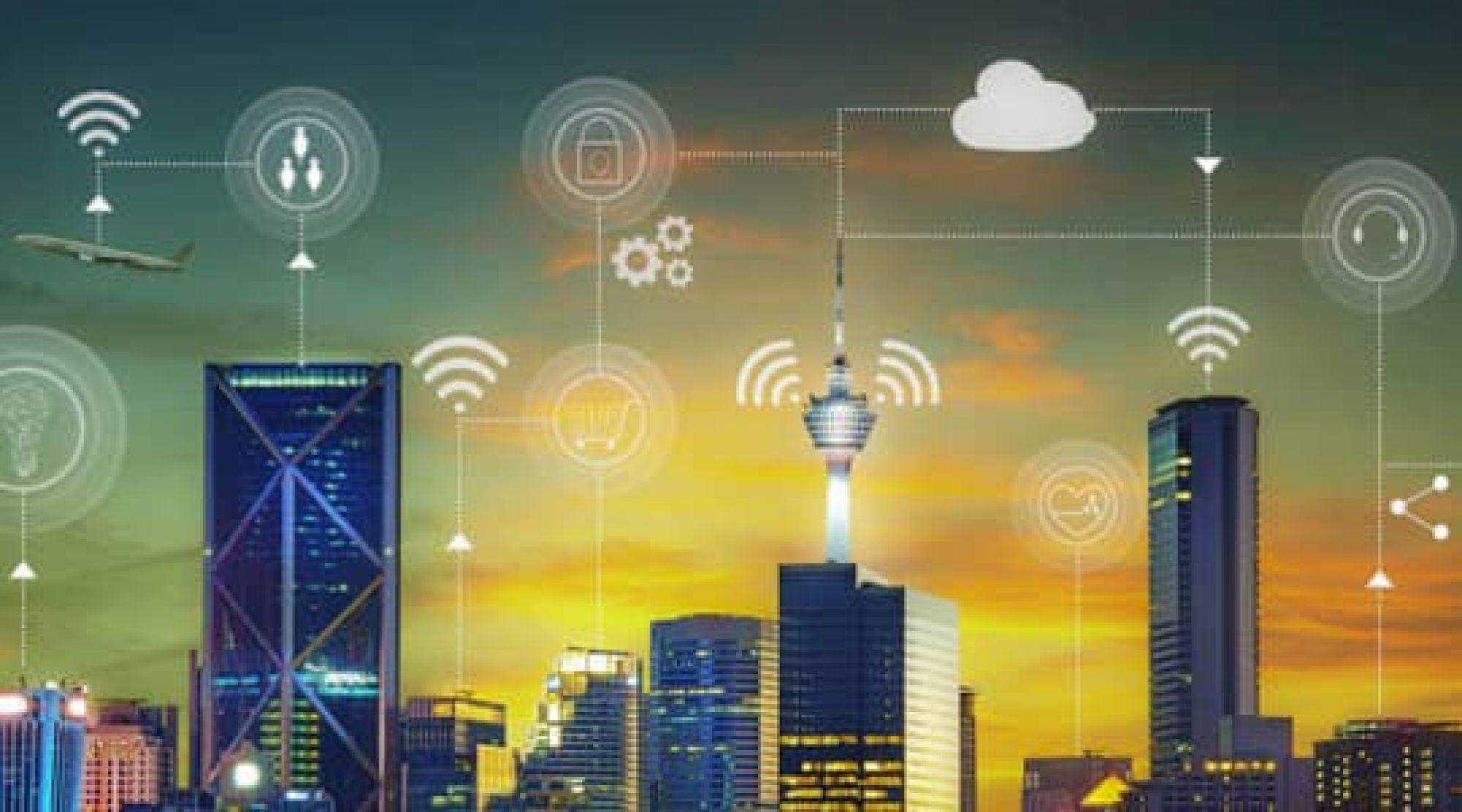 There are a number of definitions of what makes a city ‘smart,’ for example, IBM defines a smart city as “one that makes optimal use of all the interconnected information available today to better understand and control its operations and optimise the use of limited resources.”

However, in short, a smart city uses a framework of information and communication technologies to create, deploy and promote development practices to address urban challenges and create a joined-up technologically-enabled and sustainable infrastructure.

Smart cities use a variety of software, user interfaces and communication networks alongside the Internet of Things (IoT) to deliver connected solutions for the public. Of these, the IoT is the most important. The IoT is a network of connected devices that communicate and exchange data. This can include anything from vehicles to home appliances and on-street sensors. Data collected from these devices is stored in the cloud or on servers to allow for improvements to be made to both public and private sector efficiencies and deliver economic benefits and improvements to the lives of citizens.

Many of the IoT devices use edge computing, which ensures that only the most relevant and important data is delivered over the communication network. In addition, a security system is implemented to protect, monitor and control the transmission of data from the smart city network and prevent unauthorised access to the IoT network of city’s data platform.

Alongside the IoT solutions, smart cities also use technologies including:

Combining automation, machine learning and the IoT is allowing for the adoption of smart city technologies for a variety of applications. For example, smart parking can help drivers find a parking space and also allow for digital payment.

Another example would be smart traffic management to monitor traffic flows and optimise traffic lights to reduce congestion, while ride-sharing services can also be managed by a smart city infrastructure.

Smart city features can also include energy conservation and environmental efficiencies, such as streetlights that dim when the roads are empty. Such smart grid technologies can improve everything from operations to maintenance and planning to power supplies.

Smart city initiatives can also be used to combat climate change and air pollution as well as waste management and sanitation via internet-enabled rubbish collection, bins and fleet management systems.

Aside from services, smart cities allow for the provision of safety measures such as monitoring areas of high crime or using sensors to enable an early warning for incidents like floods, landslides, hurricanes or droughts.

Smart buildings can also offer real-time space management or structural health monitoring and feedback to determine when repairs are necessary. Citizens can also access this system to notify officials of any problems, such as potholes, while sensors can also monitor infrastructure problems such as leaks in water pipes.

In addition, smart city technology can improve the efficiency of manufacturing, urban farming, energy use, and more.

Smart cities can connect all manner of services to provide joined up solutions for citizens.

The concept of smart cities began as far back as the 1960s and 1970s when the US Community Analysis Bureau began using databases, aerial photography and cluster analysis to collect data, direct resources and issue reports in order to direct services, mitigate against disasters and reduce poverty. This led to the creation of the first generation of smart cities.

The first generation of smart city was delivered by technology providers to understand the implications of technology on daily life. This led to the second generation of smart city, which looked at how smart technologies and other innovations could create joined-up municipal solutions. The third generation of smart city took the control away from technology providers and city leaders, instead creating a model that involved the public and enabled social inclusion and community engagement. This third generation model was adopted by Vienna, who created a partnership with the local Wien Energy company, allowing citizens to invest in local solar plants as well as working with the public to resolve gender equality and affordable housing issues. Such adoption has continued around the world, including in Vancouver, where 30,000 citizens co-created the Vancouver Greenest City 2020 Action Plan.

Smart cities follow four steps to improve the quality of life and enable economic growth through a network of connected IoT devices and other technologies. These steps are as follows:

The ICT framework brings together real time data from connected assets, objects and machines to improve decision making. However, in addition, citizens are able to engage and interact with smart city ecosystems through mobile devices and connected vehicles and buildings. By pairing devices with data and the infrastructure of the city, it is possible to cut costs, improve sustainability and streamline factors such as energy distribution and refuse collection, as well as offering reduced traffic congestion, and improve air quality.

Why Smart Cities Are Important

54% of the world’s population live in cities and this is expected to rise to 66% by 2050, adding a further 2.5 billion people to the urban population over the next three decades. With this expected population growth there comes a need to manage environmental, social and economic sustainability of resources.

Smart cities allow citizens and local government authorities to work together to launch initiatives and use smart technologies to manage assets and resources in the growing urban environment.

Why do we need them?

A smart city should provide an urban environment that delivers a high quality of life to residents while also generating economic growth. This means delivering a suite of joined-up services to citizens with reduced infrastructure costs.

This becomes increasingly important in the light of the future population growth in urban areas, where more efficient use of infrastructure and assets will be required. Smart city services and applications will allow for these improvements which will lead to a higher quality of life for citizens.

Sustainability is an important aspect of smart cities as they seek to improve efficiencies in urban areas and improve citizen welfare. Cities offer many environmental advantages, such as smaller geographical footprints, but they also have some negative impacts, including the use of fossil fuels to power them. However, smart technologies could help alleviate these negative effects, such as through the implementation of an electric transport system to reduce emissions. Electric vehicles could also help to regulate the frequency of the electric grid while not in use.

Such sustainable transport options should also see a reduction in the number of cars in urban areas as autonomous vehicles are expected to reduce the need for car ownership amongst the population.

Creating such sustainable solutions could deliver environmental and societal benefits.

For all of the benefits offered by smart cities, there are also challenges to overcome. These include government officials allowing widespread participation from citizens. There is also a need for the private and public sectors to align with residents so that everyone can positively contribute to the community.

Smart city projects need to be transparent and available to citizens via an open data portal or mobile app. This allows residents to engage with the data and complete personal tasks like paying bills, finding efficient transportation options and assessing energy consumption in the home.

This all requires a solid and secure system of data collection and storage to prevent hacking or misuse. Smart city data also needs to be anonymised to prevent privacy issues from arising.

The largest challenge is quite probably that of connectivity, with thousands or even millions of IoT devices needing to connect and work in unison. This will allow services to be joined up and ongoing improvements to be made as demand increases.

Technology aside, smart cities also need to account for social factors that provide a cultural fabric that is attractive to residents and offer a sense of place.  This is particularly important for those cities that are being created from the ground up and need to attract residents.